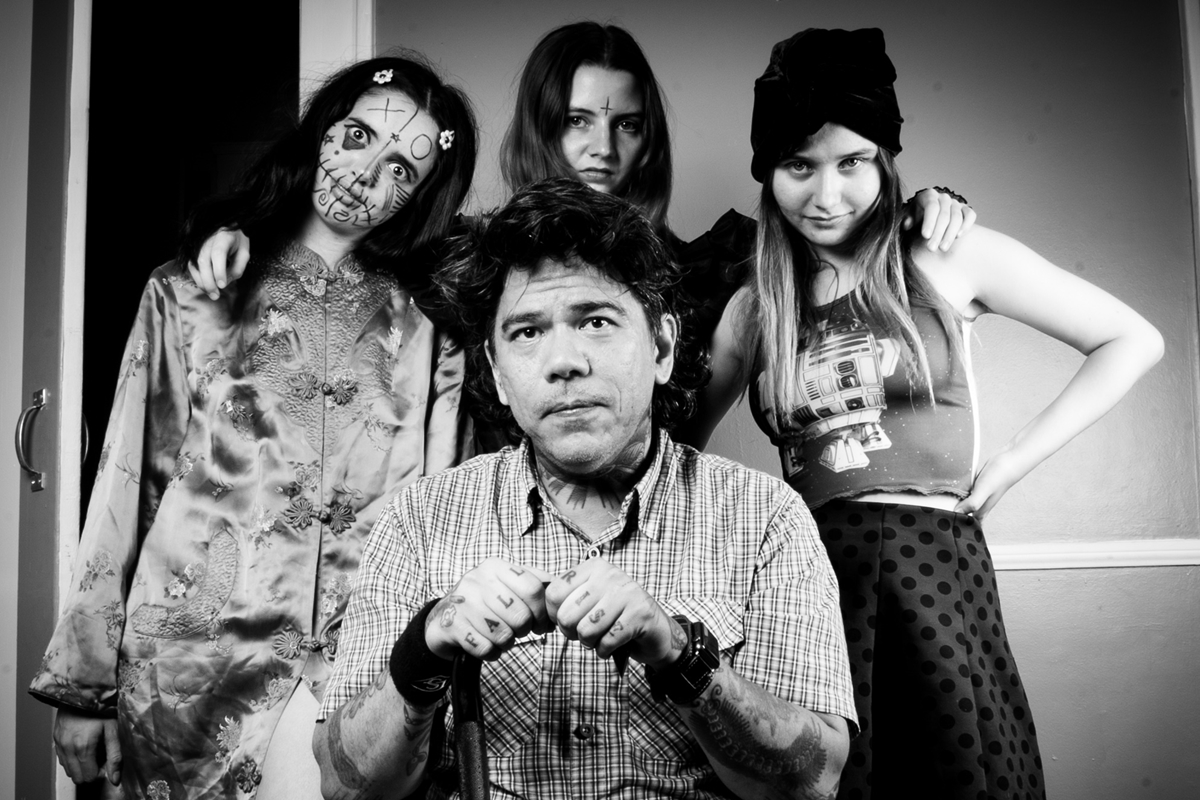 What: Drab Majesty w/Body of Light, Xeno & Oaklander and DJ boyhollow
When: Thursday, 08.22, 7 p.m.
Where: 3 Kings Tavern
Why: The darkwave show of the summer. Drab Majesty is a transgender, glam, post-punk, space alien duo that has been instrumental in making the new post-punk/Goth wave popular outside the usual circles and within the old school scene. The 2019 album Modern Mirror reveals the group’s for well crafted songs beyond the entrancing, atmospheric mood that could overshadow Deb Demure’s writing in the past. Body of Light has synthesized the minimal synth influences descended from early Depeche Mode and EBM into a dynamic, darkly ambient synth pop. Xeno & Oaklander’s minimal analog synth compositions suggest a foundation in cinema and it’s own 2019 album Hypnos takes the listener on a journey into a journey into a desolate and eerily lonely future where alien archaeologist/anthropologists study what happened to us foolish humans in the Twenty-First and Twenty-Second centuries with an emphasis on the art and music created around the turn of the Twenty-First century.

What: The Yawpers w/CITRA
When: Thursday, 08.22, 6 p.m.
Where: Leavitt Pavilion
Why: The Yawpers bring their unhinged blues punk to Leavitt Pavilion for a free show. The trio’s most recent album, 2019’s Human Question, really does delve thoughtfully and urgently into what this whole mess of humanity is about and what we can and should be doing in this life individually and collectively given our flaws and deficits of feeling, of cognition, talent and capability. But The Yawpers suggest we can’t just quit as past civilizations faced similarly destructive situations politically, economically, spiritually, environmentally and culturally.

What: Big Dopes album release w/Spirettes and Whiskey Autumn
When: Friday, 08.23, 8 p.m.
Where: Hi-Dive
Why: Big Dopes releases its new album Crimes Against Gratitude tonight at the Hi-Dive. The trio’s songs combine a rich, moody low end courtesy Justin Catanzaro’s bass and Eddie Schmid’s rich vocals. Intricate melodies and dynamic rhythms with the band, including drummer Ricky Brewer, giving the songs a rare expressiveness and vibrancy. Schmid’s lyrics seem to come from poignantly observational biographical snapshots. In telling these stories the band tells the story of a generation coming to terms with diminished future possibilities but refusing to give into despair yet finding a way to cope with creativity and empathy rather than callousness. It’s guitar-based indie rock of a sort but one that seems as informed by the emotional resonance of R&B as by left field alternative rock.

What: The Bellweather Syndicate w/The Siren Project, Autumn and Julian Black
When: Friday, 08.23, 7 p.m.
Where: Herman’s Hideaway
Why: The Bellweather Syndicate is William Faith and Sarah Rose. The former was a bassist in later era Christian Death with Rozz Williams as well as a longtime member of Faith & The Muse and playing in Sex Gang Children and The March Violets. The dark post-punk band has a driving low end and a sense of urgency to its ethereal yet gritty melodies. Autumn’s dream pop sounds like someone in the band, or everyone, listened to a whole lot of the Stone Roses, Chameleons and Kitchens of Distinction and took that as a launching point in crafting what is its own sound. The Siren Project from Denver is a synthesis of European post-punk sensibilities and emotionally expansive trip-hop.

What: Solypsis, Blackcell, Acidbat and Kid Mask
When: Friday, 08.23, 8 p.m.
Where: Thought//Forms
Why: A more experimental take on electronic music, noise and the avant-garde all around at this show including Denver Goth-industrial/noise legends Blackcell, Kid Mask’s disregard for specific style in making his deeply emotional and affecting soundscapes, Acidbat’s glitchcore industrial ambient and Solypsis which is almost as much performance art as ambient industrial.

What: The Pamlico Sound vinyl release w/The Soltones and Cosmic Joe
When: Saturday, 08.24, 8 p.m.
Where: Larimer Lounge
Why: The Pamlico Sound is releasing its new album The Funk is Not For Sale on vinyl for this show. The Boulder-based group is lead by Will Baumgartner who has played in various funk bands in Denver for years but whose roots are in New York where he, as a young kid, went to Woodstock (the original) and who moved about and played in the No Wave scene of late 70s and early 80s NYC. So The Pamlico Sound, which is very much a funk band in the traditional ways has a little different flavor in its exuberance and weirdness. The Soltones also have some funk in its sound but its smooth songwriting is steeped in jazz and R&B and its lushly composed songs have a soothing mood that doesn’t wax into the soporific, just emotionally refined and transporting.

What: Lily & Horn Horse, Banny Grove, French Kettle Station, Petite Garçon and Egg Walk
When: Saturday, 08.24, 9
Where: Rhinoceropolis
Why: Lily & Horn Horse is a New York duo that would be difficult to define except to say that its horn, vocals and beat combination is jazz, dream pop, downtempo hip-hop and avant-garde. Which is just as well given the eclectic sounds on the rest of the bill including French Kettle Stations neo-No Wave, adult-contemporary pop and performance art and Petite Garçon’s own post-garage indie pop. Supposedly the latter has a new album out tonight as well but we can neither confirm or deny so best to bring some money to buy a copy anyway.

What: Oko Tygra w/Bluebook, Hifi Gentry and Cuckoo
When: Saturday, 08.24, 7 p.m.
Where: Globe Hall
Why: Oko Tygra is the perfect blend of R&B and dream pop in the grand 4AD label band mold. Bluebook is an interesting hybrid of downtempo, Americana and the avant-garde. Cuckoo is like if a math-y indie band merged with a garage rock band and then forged a musical identity beyond that but rooted in the best aspects of both.

What: Shibui Denver #5: The Vagrant Sea, Tokyo Rodeo and DJ Couchman
When: Sunday, 08.25, 7 p.m.
Where: Mutiny Information Café
Why: This edition of our monthly series at Mutiny features DJ Couchman of the band Total Trash and the DJ night Interesting Times spinning songs before the show and between sets. It will be the debut of The Vagrant Sea which includes former members of Tarmints, The Dirty Lookers and The Symptoms (among others) and rock and roll band Tokyo Rodeo will put in a performance fresh off the road.

What: Bryan Ferry w/Femme Schmidt
When: Sunday, 08.25, 6:30 p.m.
Where: The Paramount Theatre
Why: Bryan Ferry is the charismatic singer of pioneering glam rock/experimental band Roxy Music. The latter was a huge influence on punk and alternative rock and whose music has managed to remain somewhat timeless as its classic songwriting style and willingness to go off the deep end into adventurous sonic territory has endured as captivating and relevant. Ferry’s solo work has a similarly creatively refined sensibility and flair for thoughtfully poetic lyrics.

What: KRS-One w/Righteous Revolution and illosophy
When: Sunday, 08.25, 7 p.m.
Where: Oriental Theater
Why: KRS-One was the thought-provoking MC who was the frontman for influential hip-hop crew Boogie Down Productions. His whole career KRS-One has shined a light on society’s ills with an incisive and creative critique.

What: The Vibrators, Filthy Hearts, Cyclo-Sonic and The Pollution
When: Tuesday, 08.27, 7 p.m.
Where: Seventh Circle Music Collective
Why: The Vibrators were an early English punk rock band who managed to stay around and still write worthwhile punk in the classic vein. If Stiff Little Fingers name themselves after one of your songs and go on to be a seminal influence on bands like Green Day your legacy is secure and yet The Vibrators bring a spirited live show that is worthy of that legacy as well. Its debut album Pure Mania should be in the library of any true punk connoisseur.

What: Black Flag w/The Line Cutters
When: Wednesday, 08.28, 8 p.m.
Where: Oriental Theater
Why: It’s not the classic line up of Black Flag but Greg Ginn still rips out that iconic guitar work like he wrote it last week with the unalloyed joy of a young buck. Seeing Ginn lay waste to the room that way alone is worth the price of admission.