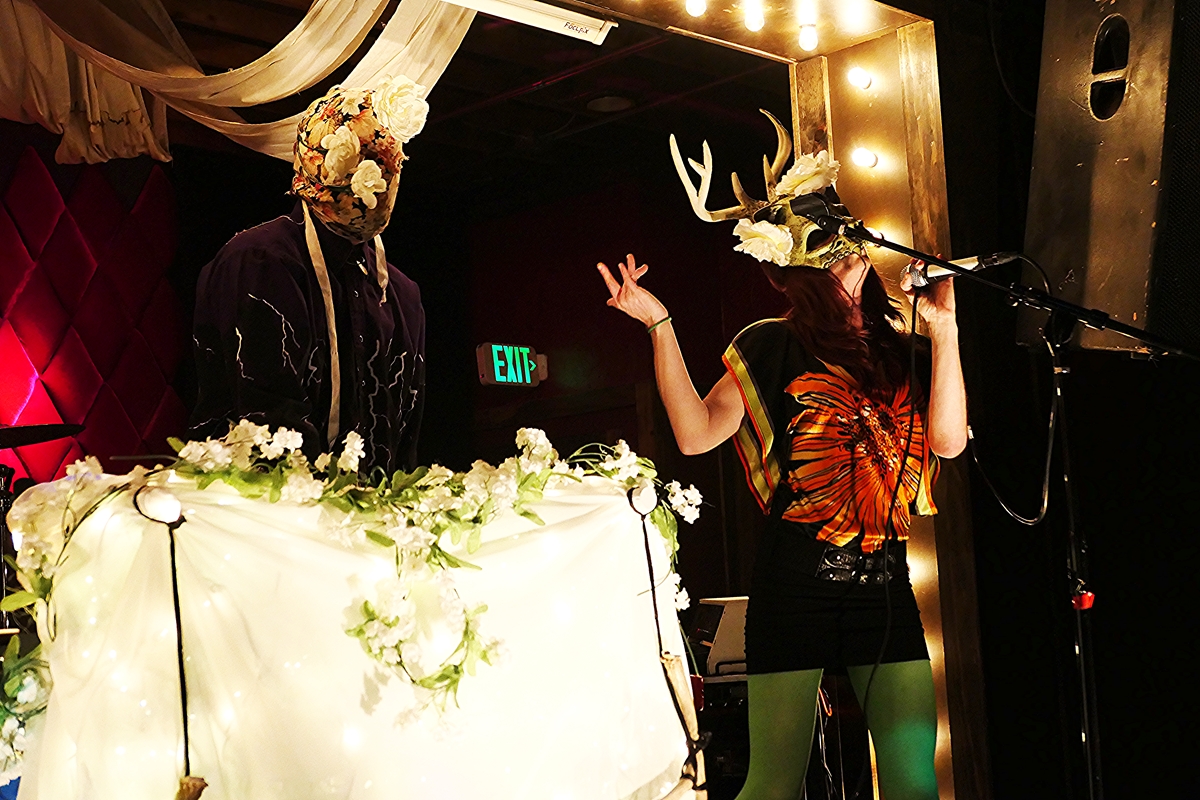 Who: Drink Drank Punk w/Sliver and Denver Meatpacking Company
When: Thursday, 12.27, 7 p.m.
Where: Lost Lake
Why: Drink Drank Punk sounds like a party game of some kind but it’s actually a punk band that sounds like some 90s grunge-inspired musicians decided to call themselves punk because that’s where grunge came from anyway. On the band’s “About” section on Facebook words have semi-randomly capitalized letters and other odd bits of bravado. Listing one of your own other projects as an influence on the band you’re in? Really? Hopefully the band is good. Fortunately, the other two bands, clearly own the influence of grunge and 90s alternative rock and make it their own. Sliver’s fury and emotionally raw performances feel like they come from a very real place. Especially with Demry West on drums playing with a joy that balances out Chris Mercer’s churning anomy. Denver Meatpacking Company could have been a solid pop band but there’s something cathartic about playing music with a bit more grit even if you’re old enough to remember when “Smells Like Teen Spirit” was toppling the glam metal temples in the early 90s without even trying. That comes across in DMC’s songwriting and shows.

Who: Khemmis w/Dreadnought, Green Druid
When: Friday, 12.28, 8 p.m.
Where: Larimer Lounge
Why: Doom band Khemmis has been making waves well beyond Denver for a few years at this point and this weekend is doing a two night run showcasing some of the best metal local metal bands including tonight with Dreadnought and its majestic, folk-inflected, atmospheric doom and Green Druid’s psychedelic tinged brand of heavy music.

Who: Joseph Lamar, Talking Mirrors, My New Dad
When: Friday, 12.28, 9 p.m.
Where: Denver Bicycle Café Beer Hall
Why: Joseph Lamar has been a bit of a musical alchemist and chameleon with his songwriting steeped in dream pop and R&B while taking on various roles as a musician in his band an in other projects. His live show is a mixture of the intimate and the mystical.

Who: Slim Cessna’s Auto Club w/Denver Broncos UK and Midwife
When: Friday, 12.28, 8:30 p.m.
Where: Globe Hall
Why: Slim Cessna’s Auto Club has, since its beginnings in the early 90s, established itself as one of the definitive bands of the Denver music outside the mainstream. With an international fanbase, SCAC, like many of the Mile High City’s best bands, plays small club shows in its hometown. The group’s lively performances of harrowing yet ultimately life-affirming music is reliably compelling, moving and, though highly theatrical, human. For this three night run (also including 12/29 and NYE) the band is bringing in refreshingly different opening act from the usual “same genre” billing. For this show, sure, dark post-punk Americana side project Denver Broncos UK, well worth seeing, but also the delicate, ethereal outsider folk brilliance of Midwife.

Who: Church Fire: Summer Camp Doom Diary release w/The Milk Blossoms, Wheelchair Sports Camp and Mirror Fears
When: Saturday, 12.29, 8 p.m.
Where: Hi-Dive
Why: Church Fire’s latest album Summer Camp Doom Diary was many years in the making from shedding the quaint but necessary early compositional ideas and methods represented by the phase in which the duo was calling itself Sewing Buttons on Ice Cream. When the band emerged into the type of group that could make powerful tribal, industrial dance music infused with a sophisticated sociopolitical orientation it really found its core audience among people who don’t see why bangers are irreconcilable with rich and thoughtful content. The new record is the apex of Church Fire’s most recent wave of artistic development which, in many bands, is where its future music will plateau even if it’s worth a listen hereafter. But if you’ve seen Church Fire in the last half year you’ve seen hints of the future direction of the band all of which is more than hinted at across Summer Camp Doom Diary like mini-prophecies, Easter eggs, of self-liberation for both the band and listener alike. For this show Church Fire is joined by other local visionary artists in the more experimental realm who make music that stretches the brain and expands your inner horizons.

Who: Pale Sun, Emerald Siam and Wild Call
When: Saturday, 12.29, 8 p.m.
Where: Lost Lake
Why: When silly people talk about the “end of guitar rock” they should be so lucky as to catch this line-up with Pale Sun’s hypnotic and moving post-shoegaze ambient rock, Emerald Siam’s left field stretch beyond brooding post-punk by incorporating hooks and emotional depth and Wild Call’s gritty, dreamy, visceral songwriting.

Who: Itchy-O w/PPL MVR
When: Saturday, 12.29, 8 p.m.
Where: The Oriental Theater
Why: Itchy-O is doing a three night run for the new year beginning tonight with costume weirdo metal band PPL MVR. While a lot of its music is some kind of sludgy hard rock the yeti-looking group freely plays with sounds and methods from other styles of music including psychedelia and hip-hop.

Who: Textures: Brother Saturn, Cloudless Rain, Gutter Spirits
When: Sunday, 12.30, 7:30 p.m.
Where: Mutiny Information Café
Why: The final Textures ambient showcase of 2018 with performances from post-rock/loop-shoegaze/electro ambient project Brother Saturn and Cloudless Rain whose own music seems to be one of freefloating, endless horizons as one would expect from a persistent virtual world chillout zone.

Who: Wildermiss w/The Solid Ocean and Panther Martin
When: Sunday, 12.30, 8 p.m.
Where: Larimer Lounge
Why: Red Fox Run was a promising band that realized that ambition when some of those guys got together with Emma Cole to form Wildermiss. It’s upbeat, earnest indie rock with interesting tonal flourishes and imaginative song dynamics that separate its musical offerings from the current spate of cookie cutter indiedom. The Red Fox Run guys also bring to the project much of what they learned about promoting themselves beyond just overplaying and oversaturating the local scene in the seemingly aimless manner of many of their peers. This is the first night of a two night run to ring in the new year.

Who: The Beach Boys
When: Sunday, 12.30, 6 p.m.
Where: Paramount Theatre
Why: It is indeed The Beach Boys probably performing choice cuts from across its career with some surprises thrown in because Brian Wilson isn’t a rote creative talent.

Who: Itchy-O w/Radio Scarlet
When: Sunday, 12.30, 8 p.m.
Where: The Oriental Theater
Why: Second night of Itchy-O’s run at The Oriental, this night Denver deathrock band Radio Scarlet will open the show.

Who: cindygod EP release
When: Sunday, 12.30, 9:30 p.m.
Where: Pon Pon
Why: cindygod is the newest band from the former members of noise rock band Gauntlet Hair. When the group emerged in the spring/summer of 2018 it had grown to a four-piece with a new name but with sounds that fans of the old band would find immediately likeable. Live, cindygod has been a reminder of what a great band Gauntlet Hair was but one that has evolved beyond that era of musical development but with the same frantic yet nuanced dynamics and joyous outpouring of sound. The group recently released the digital version of its debut EP with the vinyl available at this event.

Who: Rubedo w/Fed Rez, R A R E B Y R D $, DJ Polyphoni
When: Monday, 12.31, 8 p.m.
Where: Lost Lake
Why: Rubedo doesn’t play too many Denver shows these days. Its winning, accessible and energetic mixture of funk, noise rock and prog has found an audience beyond Denver. In 2017 Rubedo released Vaca, a sort of farewell album to the trio’s late mentor and musical partner Isaiah “Ikey” Owens. Perhaps this show will include some of the material that will make up its next chapter. For this NYE show you also get to see raucous, insightful and witty hip-hop group Fed Rez and R A R E B Y R D $, another hip-hop group but one whose soulful, even spiritual, sound is rooted in an ability to channel pure emotion in nuanced, gentle yet powerful ways.

Who: Itchy-O w/Mr. Pacman
When: Monday, 12.31, 9 p.m.
Where: The Oriental Theater
Why: Itchy-O concludes its three-night run of shows this NYE with peformance art/synth pop group Mr. Pacman. Traditionally the 3 or 4 members of the latter have performed in costume like something out of an 80s cartoon cosplay demonstration but the confrontational performance will fit in well with what follows with the onslaught of Itchy-O.

Who: Weird Wednesday: Adam Selene, The Jinjas, Vampire Squids From Hell
When: Wednesday, 01.02, 9 p.m.
Where: 3 Kings Tavern
Why: This is the first Weird Wednesday of 2019. The series, curated by independent, underground promoter Claudia Woodman, aims to highlight the stranger or more eccentric and/or more experimental music happening in Denver or dropping in on tour. For this show it’s poet/hip-hop artist Adam Selene whose beats are definitely not the standard faire and incorporates a broad palette of sounds and instrumentation, being more akin to the likes of Eyedea & Abilities and other hip-hop projects that don’t hesitate to use straight up rock and other noisy samples to give the music some edge. A good pairing with synth rock/pop weirdos The Jinjas. Psych/Americana-twinged surf rock band Vampire Squids From Hell aren’t overtly weird except when you consider that at times the group sounds like a strange hybrid of The Brian Jonestown Massacre and a mellower Man Or Astroman?