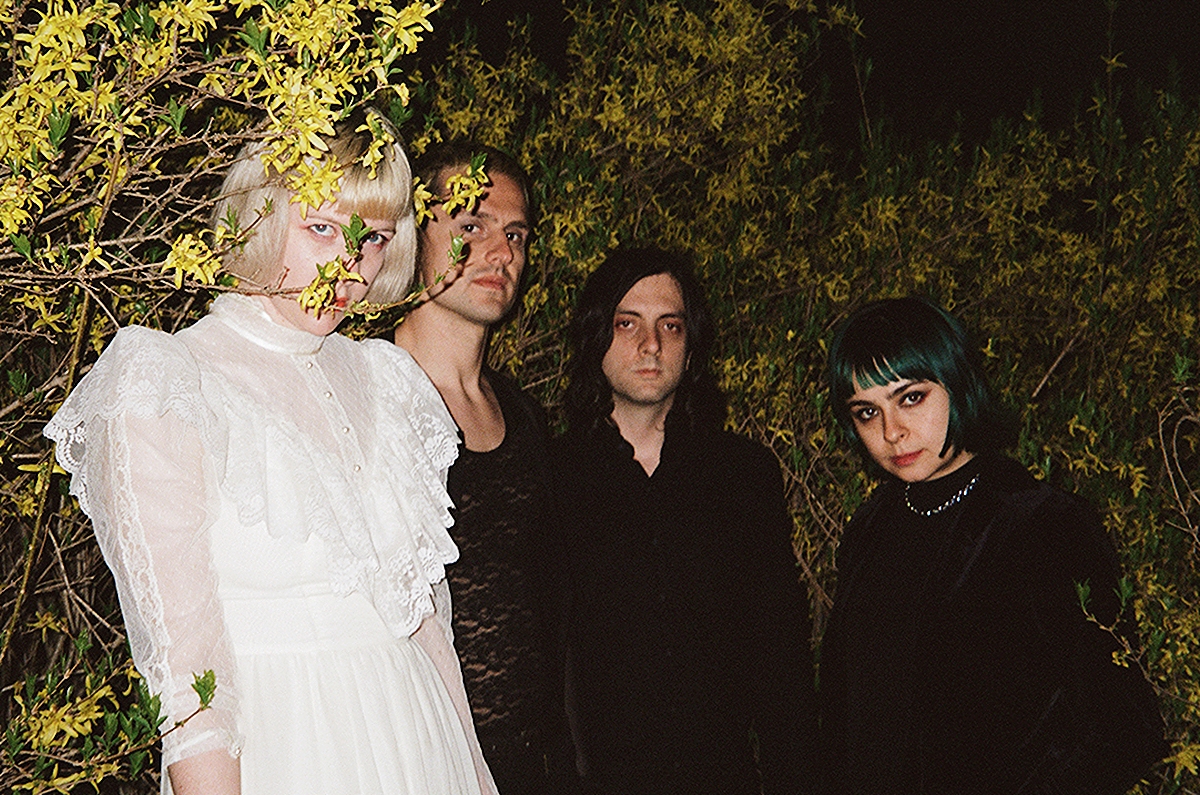 Who: Rob Sonic w/The Maybe So’s, Brett Gretzky and Hakeem Furious
When: Thursday, 03.28, 8 p.m.
Where: Ophelia’s Electric Soapbox
Why: Rob Sonic has had a fairly distinguished career for his innovative hip-hop projects Sonic Sum and Hail Mary Mallon (which included Aesop Rock and DJ Big Wiz). What has made his various efforts interesting is his use of a fairly different palette of sounds from many of his peers. His 2018 album Defriender lays out moods and textures that wouldn’t be out of place on a post-punk or deep house track or an industrial noise song. Denver’s The Maybe So’s is a duo that also weaves in unconventional electronic music and samples of organic percussion into its flow of beats and poetry.

Who: Dilly Dally w/Chastity and American Culture
When: Friday, 03.29, 8 p.m.
Where: Larimer Lounge
Why: On Dilly Dally’s 2015 album Sore the group sounded like a bit like a weird mixture of Bully and Courtney Barnett. But to be fair, it was probably something in the universe/confluence of influences across a broad swath of the collective musical consciousness. But with the 2018 album Heaven, Dilly Dally has expanded its range as a band and there is more brooding, atmospheric darkness flowing through its fuzz-laden riffs. It’s song “Doom” is more doom in tone and emotional resonance than a lot of what passes for such in the doom genre. But its inherently introspective yet expansive melodies keep the music from wallowing in stagnation. Along for this date is fellow Canadian band Chastity who are definitely more well within the realm of doomy noise rock. American Culture lately has straddled the line between indie pop, post-punk and psych country jam rock minus the wacktitude.

Who: Furbie Cakes, Space Monkey Mafia (MN), MTHirst, Fancy Pantz, Shocker Mom, Luxury Hearse and Wooflet
When: Friday, 03.29, 8 p.m.
Where: Your Mom’s House
Why: A show chock full of weirdo electronic bands, ambient and noise. And then Shocker Mom who is making the most heartwarming and healing sad beats currently being made.

Who: Hand Habits w/Tomberlin and Porlolo
When: Saturday, 03.30, 8 p.m.
Where: Larimer Lounge
Why: Meg Duffy may be more well-known for being a touring member of Kevin Morby’s band. But with the release of her album placeholder under the moniker Hand Habits should garner her plenty of attention for her own creative efforts. Superficially its mid-tempo moody indie folk but her words go deep into thoughts and feelings we don’t want to entertain but must face honestly. Not necessarily obvious and brutal trauma but the subtler pains that can deeply haunt you every day and from which are more elusive in evading. Disappointment in self, reflecting on one’s suddenly seemingly damning mistakes and the cognitive dissonance of the complexity of conflicting feelings about people, situations, existential ponderings and life in general that are all valid. Her tonal choices are all interesting and the perfect companion to explicating and maybe untangling and processing the aforementioned.

Who: Robyn Hitchcock
When: Saturday, 03.30, 7 p.m.
Where: Swallow Hill – Daniels Hall
Why: One thing that isn’t so obvious about seeing Robyn Hitchcock playing solo or with collaborators is how his simple but richly detailed guitar work is creatively varied and incorporates percussive elements with an expressive delicacy that focuses the emotional impact of his songwriting. He seems to be an endless well of interesting and poetic stories that make even what some may consider his lesser records worth a listen. Pick a point in Hitchcock’s career and you’ll find some of the best songwriting of that period whether while he was a member of The Soft Boys, his work with The Egyptians or The Venus 3. Like a magical-realist (emphasis on realist) novelist, Hitchcock’s songs offer observational insight into the human psyche through an intensely personal window.

Who: Jeff Carey, Sigtrygur Sigmarsson, Diffuser, Flesh Buzzard, Joshua Westerman. Sunk Cost and Page 27
When: Saturday, 03.30, 8 p.m.
Where: Thought//Forms
Why: Noise shows are pretty infrequent in Denver these days but this one is a showcase for some of the best noise acts going and not in the vein of the cliché harsh noise/shakebox feedback sculpting mode. Much more craft, imagination and originality here with Denver noise legends Page 27, former Austin-based noise prankster Sunk Cost, Adam Rojo of Voight’s Diffuser noise-scaping pieces and raw noise punk Flesh Buzzard. Among others.

Who: Black Dots, SPELLS, Lawsuit Models, Girl Scout Heroine and Good Family
When: Saturday, 03.30, 7 p.m.
Where: Seventh Circle Music Collective
Why: A fairly traditional punk show with less of the fashion victim thing than usual. SPELLS wears costumes and get a solid B for the music but hey, that’s better than you get a lot of the time. Girl Scout Heroine includes former members of The Geds and The Blast-Off Heads.

Who: King Buffalo w/Pale Sun and The Lycan
When: Saturday, 03.30, 8:30 p.m.
Where: Lost Lake
Why: What King Buffalo is doing, to some extent, we’ve seen a lot of over the past decade—drone-y, blues-y, doom-y psychedelia. But to give the band its due, if 2018’s Longing To Be The Mountain is any indication, it didn’t just adopt some motorik beats, it takes that sonic vehicle to places of heightened emotional impact beyond just hypnotic drive with occasional flourishes. Also it’s songwriting is much more creative and not grinding away at the same vibe and pace for an entire record. King Buffalo often reaches moments of true sonic sublimity in a way that transcends any genre associations. Pale Sun will bring a different kind of atmospheric heavy as the trio’s finely honed space rock has similar roots as King Buffalo but whose music touches subconscious places in the mind with both tone, rhythm and emotional vibrancy. Vocalist/guitarist Jeff Suthers channels the visceral quality of the music well with his singing but he’s also tapping into something in the collective consciousness in the performance as well.

Who: Olivia O’Brien w/Kevin George
When: Monday, 04.01, 7 p.m.
Where: Larimer Lounge
Why: Olivia O’Brien was about fifteen years old when she got a boost up as a singer and songwriter after garnering the attention of Australian pop artist gnash who discovered her through her posting of a cover of one of his songs on Soundcloud. Over the past four years, O’Brien has recorded with gnash and released a string of singles. “Trust Issues” from 2016 revealed a thoughtful sensibility and self-awareness that can be uncommon in general but definitely in a teenager. O’Brien’s R&B and soul inflected pop and commanding, emotionally nuanced, stage presence will probably find a wider audience after this current tour and the April 26 release of her debut full-length Was It Even Real? For now, you can see her at a small club like Larimer Lounge.

Who: Ten Fé w/Ten Miles South and Paul Kimbiris & The Dark Side of Pearl
When: Tuesday, 04.02, 7 p.m.
Where: Globe Hall
Why: Been Moorhouse and Leo Duncan got their start busking in London before recording their 2017 debut album Hit the Light. Before taking the music on the road, the duo brought on board a band to fill out the sonic details. The group’s 2019 album Future Perfect, Present Tense sounds remarkably sophisticated for a relatively new band. Its particular incorporation of synth into songwriting might remind some listeners of The Call or later-era The Sound, but without the punk edge. That’s no knock on the music because its softness doesn’t quite wax into the 70s Laurel Canyon worship that’s been en vogue of late. Rather its the sound of a band exploring and refining where it will go next while perfecting an exquisitely lush minimalism without sacrificing the textural details that have made its songwriting noteworthy up to now.

Who: Vanilla Milkshakes digital album release show
When: Tuesday, 04.02, 7 p.m.
Where: Mutiny Information Café
Why: Its been four years since Vanilla Milkshakes released Tall People Have No Feelings. Line up changes and a release of a cover of “Breed” by Nirvana in 2018 later, the grunge-y pop-punk band (singer/guitarist David McGhee makes no bones about being influenced by The Offspring) has released its best record with Punching Cows. Recorded with Jack Endino and guitars tracked through one of Kurt Cobain’s old amps, on the record McGhee’s vocals are clearer and stronger, the songwriting more focused. But the idiosyncratic quality of the lyrics and McGhee’s vocals, which is one reason none of this comes off like a band that would be playing that final Warped Tour. The sense of melody and tight rhythms give even the most melancholy of the songs (“Mommy Said to Get a Job” and “Green And Sober” for instance) a buoyant quality that doesn’t seem to downplay the real feelings and experiences that likely inspired the song. There are enough rough edges to keep the record interesting throughout. The band performs infrequently these days so this is a good opportunity to see the Vanilla Milkshakes in a small venue with the jokes from stage inserted between songs. Besides, drummer Frank Registrato is a wizard at helping keep things on track with no heavy hand and the sheer finesse and power of his playing.

Who: Hop Along w/Summer Cannibals
When: Tuesday, 04.02, 7 p.m.
Where: Bluebird Theater
Why: Frances Quinlan performed in early versions of Hop Along as a solo acoustic act for the first four or five years until putting together a fledgling band around 2009. Even before signing to Saddle Creek Records in 2014, Quinlan’s songwriting was not short on imaginative storytelling like she was imagining the lives and situations she encountered in either her everyday life in Philadelphia or on the road and extrapolating it into colorful imagery and a keen sensitivity and insight into the subjects of her songs even when the inspiration is drawn directly from her own life. Any band that names its album Bark Your Head Off, Dog (2018) has a healthy sense of humor and the absurd without drifting into self-parody.

Who: Weird Wednesday: Gort Vs. Goom, The Far Stairs, The Pollution
When: Wednesday, 04.03, 7 p.m.
Where: 3 Kings Tavern
Why: None more weird for Weird Wednesday. Gort Vs. Goom are like the post-Devo, prog punk version of The Fugs. The Far Stairs is a deconstructionist pop project that sounds like more well-crafted pop than most bands trying to fool us into thinking they’re not utter frauds. Plus sometimes there’s a Robyn Hitchcock cover involved which bespeaks of an unspoken artistic ambition far beyond the usual. The Pollution got back to punk through burning through on hardcore, psychedelic rock, krautrock and Kiwi rock and taking bits and pieces of each to put together a Frankenstein’s Monster of music where you can’t find the sutures.