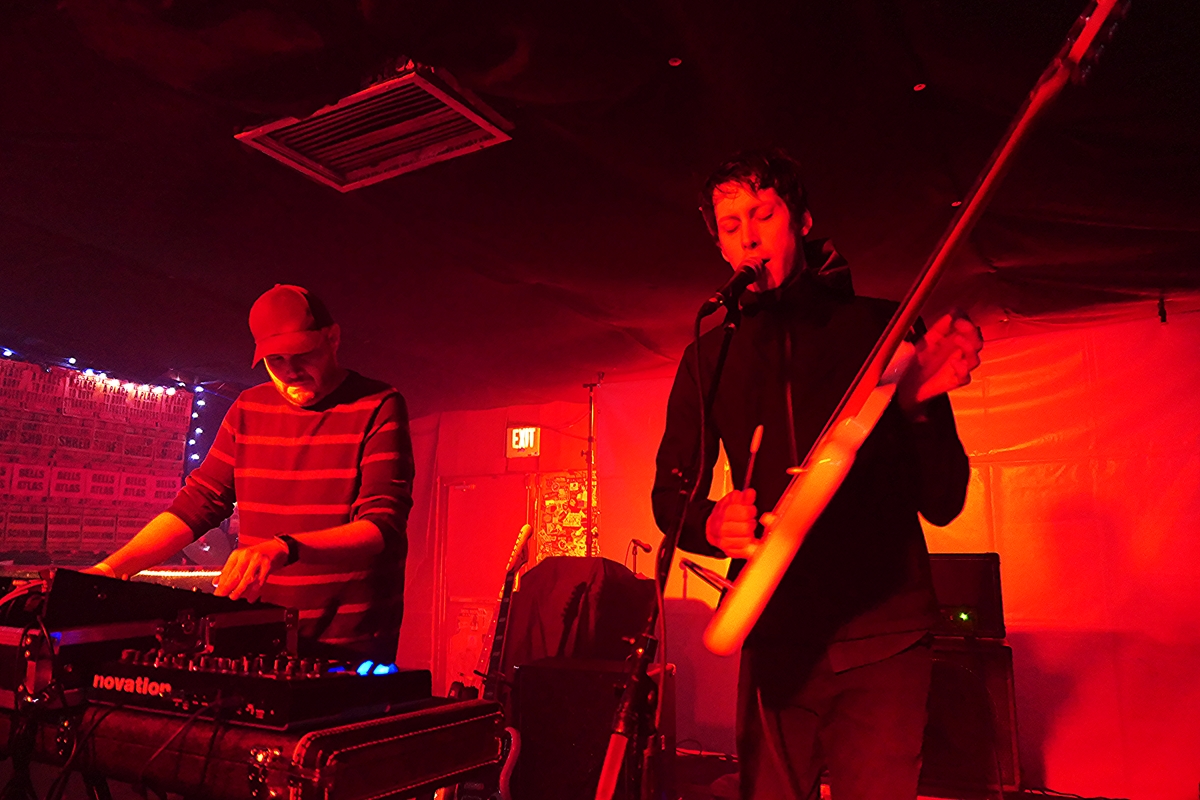 Who: Nekrofilth album release w/Phallic Meditation and Keef Duster
When: Thursday, 01.10, 8 p.m.
Where: Hi-Dive
Why: Nekrofilth releases its new album Worm Ritual tonight at a show with heavy psychedelic bands Phallic Meditation and Keef Duster. Nekrofilth’s sound is more akin to classic early thrash and black metal. On the new record the band does cover “Poison” by Venom, after all. Like the latter and Slayer, Nekrofilth has a playful quality to its aggression and ripping guitar work. Song titles like “Vomit Dog,” “They Took My Skin,” “Ready to Defile” and “Severed Eyes” suggest a healthy sense of the viscerally absurd with an unironic joy in the cartoonishly horrific the way one might enjoy the gnarliest B horror movie. Fans of blackened thrash rejoice, Nekrofilth has what you’re looking for.

Who: Random Temple w/Thistledown
When: Thursday, 01.10, 9 p.m.
Where: Black Buzzard
Why: “Rhythm & Folk” band Thistledown will perform with Random Temple’s more production-oriented electronic project under his own name.

Who: Product Lust album release show w/Goon, Herse, Candy Apple
When: Friday, 01.11, 7 p.m.
Where: Seventh Circle Music Collective
Why: Product Lust’s feral and driving 2018 album Year of the Rat is being celebrated tonight with a now rare live show as vocalist Kat Salvaggio is attending school out of Colorado. The seething post-punk band’s wiry energy fits in well with weirder hardcore and punk and thus this bill with Goon, Herse and Candy Apple is an opportunity to see bands that have punk of some stripe as their root but who are taking that spark in interesting directions.

Who: Lazarus Horse
When: Friday, 01.11, 8 p.m.
Where: Mutiny Information Café
Why: Lazarus Horse is the band that comes about when someone with good taste in music and good creative instincts writes a bunch of experimental rock music that doesn’t seem obviously influenced by anything else but creative flights of fancy, escaping to daydreams while doing meaningless work as a tool for staying sane in a civilization that’s grinding its best people into the dirt. It’s the soundtrack to that internal rebellion that becomes contagious.

Who: Glasss Presents: Chromadrift album release w/Gold Trash and Bowshock
When: Saturday, 01.12, 8 p.m.
Where: Mutiny Information Café
Why: Chromadrift’s Cloudless Mind is the bright, ethereal flow of textured melodies that eases the freeze of winter. Fans of IDM and more abstract post-rock will appreciate Drew Miller’s blend of processed guitar, live synths and sequencing. Though the album dropped on January 3, this will be your first chance to see this music live in the new year. Also performing is noisy electroclash duo Gold Trash and downtempo jazz improv group Bowshock.

Who: e-scapes, Zealot and The Far Stairs
When: Saturday, 01.12, 7:30 p.m.
Where: The People’s Building
Why: This’ll be probably the first indie rock show worth checking out in Aurora, Colorado since The Masculine organized one in 2009 at the old Other Side Arts space in downtown. The People’s Building is also downtown and across the street from Aurora Fox Theater. Zealot includes former members of The Don’ts and Be Carefuls, The Pseudo Dates, Violent Summer, Ideal Fathers and other bands most people haven’t heard of but should check out. The Far Stairs is a band that makes strange music sound more catchy and accessible than it has any right to.

Who: Pink Hawks, Atomga, Roka Hueka
When: Saturday, 01.12, 8 p.m.
Where: The Bluebird
Why: The local Afrobeat band all-star line-up.

Who: Pineross EP release w/Lady Gang
When: Saturday, 01.12, 7 p.m.
Where: Ubisububi Room
Why: Kevin Larkin of Chimney Choir fame is releasing his most recent EP Esplanade at this show in the extra intimate and cozy Ubisububi Room underneath the Thin Man and St. Mark’s. Lady Gang sounds like a full band but is just Jen Korte making maximum creative use of a loop station to augment her already considerable talents as a singer-songwriter.

Who: Luke Vibert, Seied and Kanyon Walker
When: Saturday, 01.12, 7:30 p.m.
Where: The Black Box
Why: Luke Vibert has long been on the forefront of modern experimental electronic dance music in various forms. Fans of Dilla, Flying Lotus and Blockhead will find a lot to like in Vibert.

Who: Crushed!? W/The Uglys, Tides, Stonewall BLVD and Arctobog
When: Sunday, 01.13, 7 p.m.
Where: Seventh Circle Music Collective
Why: Originally from the much smaller nearby town of Belen, Crushed!? is now based out of Albuquerque. Its post-hardcore sound has more in common with the likes of a more melodic At the Drive-In or Touché Amoré than the more screamo end of that music. Initially the music reminds one a bit of the great punk bands of the late 90s and early 2000s who adopted a bit of the math rock thing. But its rhythms are more inventive and wide-ranging like something one might have expected out of 90s DC and other East Coast rock like Versus, Helium and The Dismemberment Plan. The group’s 2018 album Sins of the Father is refreshingly difficult pin with a specific genre designation.

Who: R.Ariel, Kafari, Entrancer and Voight
When: Monday, 01.14, 7:30 p.m.
Where: DATELINE
Why: This event is a combination of touring art installation courtesy and musical performances at DATELINE art gallery. R.Ariel’s new album Where You Are is an emotionally uplifting album of ethereal sounds and buoyant flow of bright tones. Kafari’s 2018 album Beholding is a masterpiece of minimalism like it was composed while somehow spending contemplative mornings underwater and absorbing a deep sense of peace. Entrancer has been spending years honing the ability to explore whatever directions his mastery of synthesis and beatmaking takes him. His 2018 album Decline Vol. 1 is true soundscaping that draws you into a sonic journey that while impressionistic and composed of deep layers of tone and texture conveys a sense of place physically and emotionally. Is the “Decline” of the title something to dread or something to greet as the inevitable cycle of life and death? The album offers no pat answers but it certain captures the ineffable moments of decline of a phase of one’s life, of civilizations and of all authoritarian orders. Voight may finally play a deep house/techno set. If not, it’ll be, by far, the loudest project of the night with its fiery and intense industrial post-punk shoegaze.

Who: Solos/Duos – Denver Avant Garde Music Society
When: Monday, 01.14, 8 p.m.
Where: Thought//Forms
Why: This night, long held at other venues over the years, has re-emerged at Thought//Forms gallery. You never know what you’ll see but this night you’ll also get to see a set from Denver’s premiere spontaneous composition band Animal / object.

Who: Freq Boutique
When: Monday, 01.14, 8 p.m.
Where: Fort Greene
Why: This reoccurring event organized by electronic equipment company WMD, this night is sort of an open mic for synthesizer enthusiasts. This night’s festivities may include a set from hip-hop/experimental electronic dance artist Strange Powers.

Who: Mick Jenkins w/Kari Faux
When: Tuesday, 01.15, 7 p.m.
Where: The Bluebird Theater
Why: Mick Jenkins 2018 sophomore album Pieces of a Man is a bit of a tribute to Gil Scott-Heron’s 1971 album of the same name. Like Scott-Heron, Jenkins offers snapshots of the world around him in words with musical accompaniment to set the vibe. The organization of the album and the experience of listening to it is something like a hip jazz and poetry night. The opening track is called “Heron Flow” as a nod to Gil and his record’s opening track, the influential song poem “The Revolution Will Not Be Televised.” Jenkins and his collaborators evoke the feel of a hazy after hours jazz club across the record with a sense of blending old school production and present day wordsmithing. Jenkins makes fairly mundane life experiences seem mythic and cool as Scott-Heron did in his day. Also on this bill is one of modern hip-hop’s greatest talents, Kari Faux. Her EPs, partly boosted by music appearing in the comedy series Insecure, combine a rebellious swagger with an otherworldly and mysterious quality – a rarity in music generally.

Who: Ensiferum w/Septicflesh and Arsis
When: Tuesday, 01.15, 7 p.m.
Where: The Oriental Theater
Why: Helsinki, Finland’s Ensiferum is a melodic death metal band in the vein of the Gothenburg style but on the more orchestral end. Its use of acoustic guitars and folk structure and progressions give its music an expansive feel that evokes images of standing at the helm of one’s longboat charging toward unsuspecting European enclaves in the ninth century. Fans of Enslaved may enjoy Ensiferum’s similarly joyful performances.

Who: Supersuckers w/The Hangmen and Reno Divorce
When: Tuesday, 01.15, 7 p.m.
Where: Larimer Lounge
Why: Supersuckers started playing its brand of fuzzy cowpunk in Tucson, Arizona in 1988 before moving to Seattle in 1989 near the beginning of when more than a few music journalists from beyond the Pacific Northwest were starting to take not of happenings in the Emerald City’s underground. The band never made the big time the way the grunge bands everyone has heard of did but it has been able to carve out a career for itself and its wiseacre, intentionally lowbrow humor. Who else would start off their 1992 album on Sub Pop, The Smoke of Hell, with a song called “Coattail Rider” at the peak of the alternative rock explosion? Such chutzpah must continue to be honored. Oh yeah, the trio’s 2018 album, out on Acetate Records, is called Suck It. That the underground rock world has come back around to the sound Supersuckers perfected three decades ago is surely not lost on the band as a choice bit of irony. The song “History Of Rock n’ Roll” in which Eddie Spaghetti sings about how Supersuckers, the greatest band in the world is a footnote in the history of rock ‘n roll suggests they’re well aware.