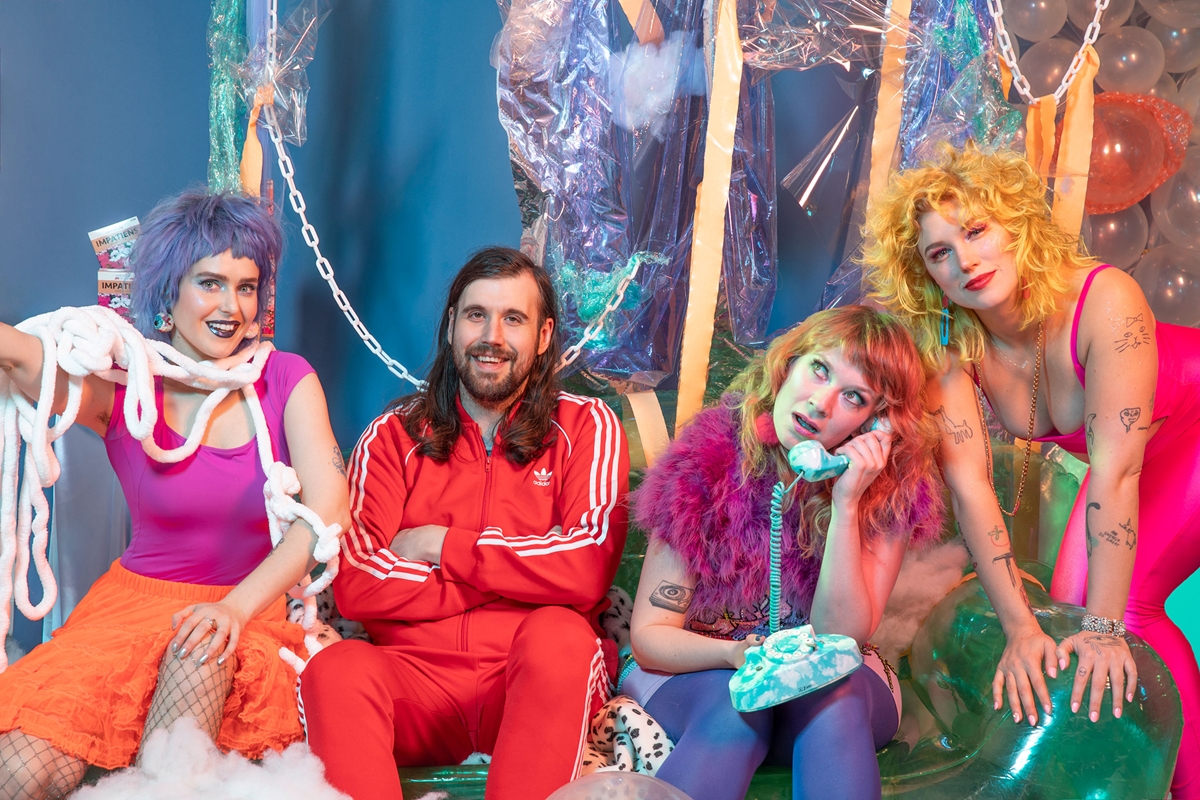 What: Turvy Organ album release w/Panther Martin, Sour Boy Bitter Girl
When: Thursday, 06.13, 8 p.m.
Where: Hi-Dive
Why: The Ghost at the Feast is Denver indie rock band Turvy Organ’s new record. What has always set the group apart from the oft-necessary but lazy “indie rock” overarching term is that it most certainly is not operating to jump on some trendy sound or bandwagon. Yes, you’ll hear the echoes of Modest Mouse in some of Ilya Litoshik’s vocals but from there the dynamics of the music and the songwriting is too idiosyncratic to fit into the mold of anyone else. The new album has what sounds like a story arch trying to make sense of a deep yearning for place and identity and coming to accept things as they are. Very Zen. But that journey is one worth taking with the band. There isn’t a single sonic flavor Turvy Organ employs across the album except for maybe some tasty, energetic melodic bass lines. That may even be how the record ties together outside of Litoshik’s highly charged and wide-ranging vocals. Splicing together post-punk moodiness and wiry energy with the frayed musical and emotional edges of 90s lo-fi rock, Turvy Organ has not just come to terms with what it’s about as a band The Ghost at the Feast but with what it’s like to be an underground rock band at this juncture in our culture where if you’re not doing it for the right reasons you’ll undermine your goals by not seeming honest.

What: TOKiMONSTA w/Holly and Blackbird Blackbird
When: Thursday, 06.13, 9 p.m.
Where: Club Vinyl
Why: TOKiMONSTA garnered a name for herself for crafting imaginative and lush downtempo beats that wouldn’t be out of place in the body of work of some of the more melancholy artists on the Warp and Stones Throw roster. She has a real gift for expansive, complimentary synth lines and multiple layers of percussion to accent the tempo of her songs. As a DJ TOKiMONSTA mixes in plenty of material from across a broad spectrum of modern electronic music.

What: Anderson .Paak w/Earl Sweatshirt and Thundercat
When: Friday, 06.14, 6 p.m.
Where: Red Rocks
Why: Three of the most creatively brilliant artists of modern hip-hop on one bill anywhere would be noteworthy, at Red Rocks it would be deserving of the word epic.

What: Sympathy F
When: Friday, 06.14, 9 p.m.
Where: Goosetown Tavern
Why: Formed in 1991, Sympathy F is one of the few, if not only, still active bands from Denver’s alternative rock era whose melancholic, jazz-inflected, dream pop reflects an era in Denver where the city felt dark, neglected and wide open. When creative weirdos could rent a warehouse on the relatively cheap and hang out with each other and converse and mutually inspire and otherwise have their own subculture that was vibrant and not well known by the world outside the Mile High City. When downtown had viaducts (Fifteenth and Twentieth Streets) that went from downtown proper to a now long gone warehouse district, where the old Montgomery Wards build stood west of downtown like the abandoned monolithic structure from a bygone era. That the band’s songs are emotionally powerful and moving and intense yet luminous doesn’t hurt because it has been written from a place of nostalgia, but at its heart is a shard of that unique time and place in Denver’s history and it shines forth from the band’s entrancing performances.

What: Daikaiju
When: Friday, 06.14, 7 p.m.
Where: Tennyson’s Tap
Why: Writing about Daikaiju seems folly at this moment so here’s a video that gets at some of the chaotic glory of the weirdo surf band from Alabama.

What: Lazarus Horse, Mt. Illimani, Enji and Sam Morris
When: Friday, 06.14, 8 p.m.
Where: Mutiny Information Café
Why: Maybe Eddie Durkin shoulda zigged when he shoulda zagged here and there in life. But haven’t we all? His old band Sparkler Bombs was pushing punk and noise rock and modern proto-psychedelia in interesting directions. But nearly a decade hence, Durkin has been writing songs under various project names including Lazarus Horse. Imagine if someone somehow bought Rainwater Cassette Exchange, The Glow Pt. 2 and a few Julianna Barwick and Grouper records pluse The Velvet Underground & Nico and got sent off with their parents to scientific station duty at Edinburgh of the Seven Seas with spotty internet but a good instruments and pedals and some recording equipment. That’s basically what Lazarus Horse sounds like—drawing on the weirdo rock familiar while sounding ineffably different from even that.

What: Tacocat and The Paranoyds w/Princess Dewclaw
When: Saturday, 06.15, 8 p.m.
Where: Larimer Lounge
Why: Seattle’s Tacocat and L.A.’s The Paranoyds are making thought-provoking and emotionally nuanced fuzzy post-surf-punk pop with a refreshing level of depth and spirited energy. Although Tacocat has been associated with the sort of surf punk thing the past decade it’s always been different from all of that because its songwriting has been brimming with irreverent humor, playfulness and a surreal and colorful aesthetic. The cover of its new album This Mess is a Place is striking when you see it at the record store and draws you in with its inviting, retrofuturistic collage style promising something within that will offer interesting stories and perspectives that aren’t trend hopping or trite blandishments about love or needing to always center all content on what’s topical. In that way Tacocat offer a view of a more interesting and vital future for all of us. Paranoyds can be reminiscent of The Raincoats if that band came from southern California instead of London with the wonderful, unconventional choruses and noisy guitar. Watch out for the group’s new 7-inch “Hungry Sam”/”Trade Our Sins” out on Suicide Squeeze July 12.

What: Jamila Woods w/Duendita
When: Saturday, 06.15, 7 p.m.
Where: Lost Lake
Why: Jamila Woods recently released Legacy! Legacy! with song titles drawn from names of some of the greatest artists, writers and thinkers of color from America and beyond. Rarely do musicians name check the likes of Zora Neale Hurston, Frida Kahlo, Eartha Kitt, Sun Ra, Octavia Butler, James Baldwin, Jean-Michel Basquiat, Miles Davis, Muddy Waters and others of similar cachet at all much less with such style and soulfulness. Woods’ voice is commanding and wise and one gets the sense you’re learning something about the human beings named as they impacted Woods as a person and an artist in her own right. She doesn’t pretend to speak for them but reflect their deep influence through her own lens and how their work has inspired her to do what she hopes is interesting and worthy in her own right. It’s a deep record worth repeated listens. Fans of Nina Simone and Erykah Badu should give Woods a listen.

What: Natural Velvet, Church Fire, Rabbit Fighter and Bert Olsen
When: Sunday, 06.16, 8 p.m.
Where: Lost Lake
Why: Natural Velvet bassist/singer Corynne Ostermann told the Baltimore Sun in 2016 “’Basically, we aim to be a “Sailor Moon” villainess.’” And who wouldn’t want to see that band? Apparently a post-punk band it sure has some nefarious punk energy but the fun kind like what you might imagine a raccoon is thinking. A good fit with Denver’s industrial dance pop powerhouse trio Church Fire whose subversive and politically charged music is not just cathartic but deeply emotional on multiple levels. This is the last show post-punk/dream pop duo Bert Olsen is playing under that name. The group recently lost its drummer and is changing to maybe using a drum machine and changing focus a bit and taking on the name Gila Teen. But it’ll still be Hunter Woods and Aidan Bettis on vocals/guitar and bass respectively so the same luminously evocative songwriting will remain.

What: Pile w/State Champion and Warring Parties
When: Tuesday, 06.18, 7 p.m.
Where: Larimer Lounge
Why: Pile has long been making the kind of post-punk/noise punk/lo-fi music that never really sounds like anyone else. Its new record Green and Gray is filled with the band’s signature, and always interesting, counter-point guitar riffing and richly varied song dynamics. The group switches up the pace in a song, conveying the way a mood will pass through your mind as you’re working through memories and contemplating what your life should be about and diving deep into how it really is. All their records are worth a listen and the latest one may be their best.

What: Charly Bliss w/Emily Reo
When: Tuesday, 06.18, 7 p.m.
Where: The Marquis Theater
Why: On 2017’s Guppy, Charly Bliss sounded a bit like other bands mining the 90s, fuzzy alternative pop bands for inspiration but with great energy and Eva Hendricks’ ebullient vocals. With Young Enough the group’s emotional palette seems to have grown exponentially and its sound evolved into a kind of atmospheric power pop but somehow without losing the verve that powered its full-length debut.

What: Lavender Fest Denver: Where in the Hell is Lavender House? The Longmont Potion Castle Story (screening)
When: Tuesday, 06.18, 6:30 p.m.
Where: Oriental Theater
Why: Longmont Potion Castle is the phone prank wizard extraordinaire of all time. His early use of odd sound processing methods for prank calling in the 80s and early 90s went above and beyond other, perhaps more well-known prank call “comedians.” Still mysterious after all these years someone finally made a documentary about his exploits and it’s screening tonight at the Oriental.

What: Operators w/Doomsquad
When: Tuesday, 06.18, 7 p.m.
Where: Lost Lake
Why: Dan Boeckner is best known for being in some of the most interesting rock bands of the past two decades including Wolf Parade and Divine Fits. But in the past five years and more he’s been in a band that now includes Devojka, Sam Brown and Dustin Hawthorne that has been exploring the use of analog synths to write the kind of bright, brooding pop songs that wouldn’t sound out of place at some weird “New Wave” in the early 80s that hosted the likes of Gary Numan, Sparks and Fad Gadget. Rather than simply ethereal melodies, Operators has a robust low end in its mix giving the music some real power and momentum rather than merely sounding pretty. The quartet is currently touring in support of its 2019 full-length Radiant Dawn.

What: Wand w/Dreamdecay
When: Wednesday, 06.19, 8 p.m.
Where: Globe Hall
Why: Wand bridged the gap between weirdo, psychedelic lo-fi rock à la Pavement with the heaviest metal but without ever come off live like a metal band. More like indie rock nerds who never had to turn their nose up at the kinds of dynamics and sounds one heard in 70s hard rock, prog, the more inspired jam bands and stuff like Sleep. Currently the group is touring in support of its 2019 album Laughing Matter. On the latter it sounds like the group has been listening to some more post-punk and post-rock like Slint.

What: Mastodon and Coheed and Cambria and Every Time I Die
When: Wednesday, 06.19, 5 p.m.
Where: Fillmore Auditorium
Why: On Mastodon’s 2009 album Crack the Sky the Atlanta-based metal quartet aimed to write their version of a classic rock album with strong melodies and great mood and solid songwriting. True enough the overall tenor of the record with its dynamics out of step with most metal at the time, but anticipating where so many rock bands, not just metal, would go over the next decade. This is sort of a Tenth Anniversary type tour but the band recently recorded an homage to its late manager Nick John called “Stairway to Nick John” that is a cover of the Led Zeppelin song that some people may have heard at some point in their lives. The single was released on Record Store Day and the proceeds are going to benefit the Hirschberg Foundation for Pancreatic Cancer.