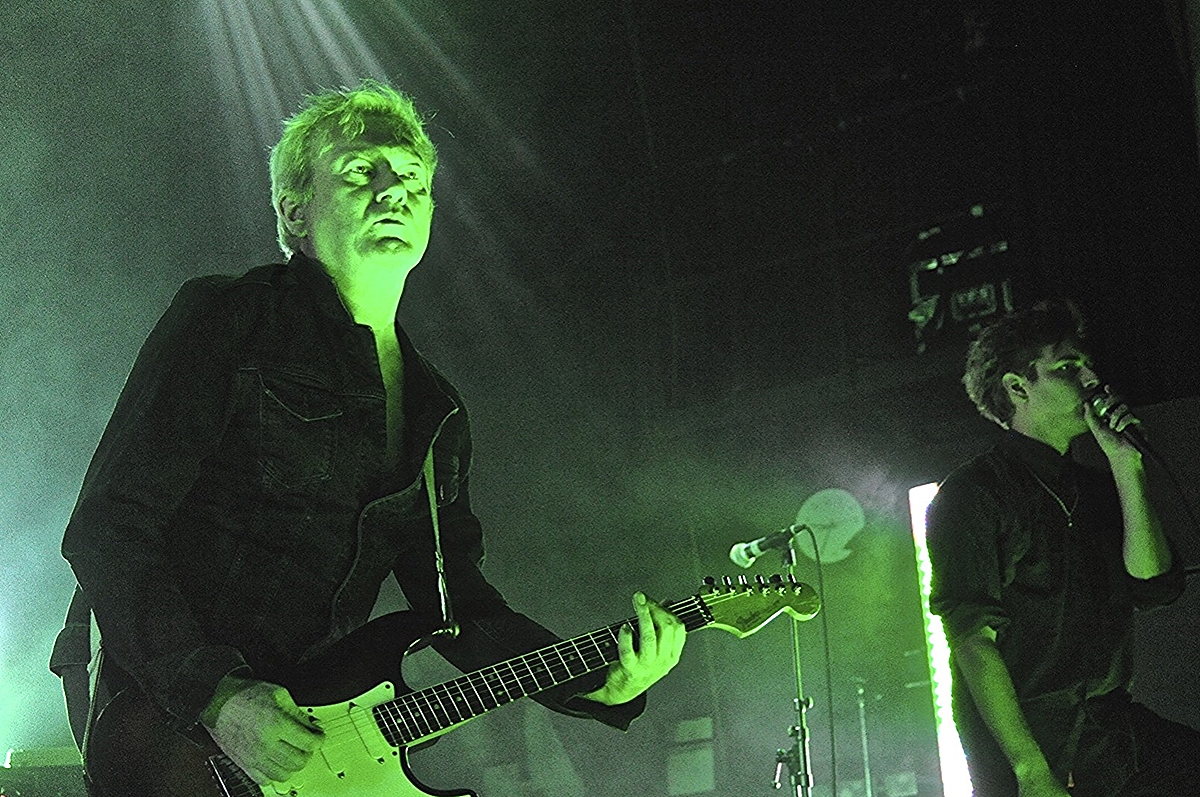 Who: Hockey Dad w/Hunny
When: Thursday, 02.07, 7 p.m.
Where: Globe Hall
Why: Australia is not the first place one thinks of when it comes to hockey but New South Wales has ski resorts so maybe the name of the band Hockey Dad, from Windang, isn’t as cheeky as seems but it’s a surf rock band so kudos. But Hockey Dad grew up surfing and skating so it’s sound reflects the spirit of that lifestyle more so than simply falling into trendy sound. With Hockey Dad think more like The Saints gone power pop.

Who: A Light Among Many, Kenaima, URN. and Giardia
When: Thursday, 02.07, 8 p.m.
Where: Hi-Dive
Why: A Light Among Many is heavy drone drenched in the primal spirits of the local landscape. URN includes former members of Skully Mammoth and thus doom with a sense of humor yet somehow still gritty and epic. Kenaima sounds a collision of Converge-esque post-hardcore and thrash. Giardia is pushing the envelope of heavy music by finding the sweet spot where drone-y bass, saturated synth work, jazz-inflected drums and weirdo prog intersect.

Who: Marcus Church EP release w/Kali Krone, Artless Bravado and Sweetness Itself
When: Friday, 02.08, 9 p.m.
Where: The Skylark Lounge
Why: Dustin Habel has been grinding away writing songs since at least the mid-2000s. Under the moniker Marcus Church he’s done solo work, playing all the instruments and recording the songs, as well as in collaboration with a small circle of bandmates. The prolific songwriter has perhaps not garnered the recognition he deserves for his lo-fi, Dinosaur Jr/Yo La Tengo-esque compositions, but the project’s latest effort, the Marcus F. Church EP, has a touch of jangle like something Mitch Easter might take an interest in producing—introspective and warm but upbeat. The band has been a trio for a bit now and tonight you can catch the new set of songs, as well as choice cuts from Habel’s catalog, live.

Who: Gun Street Ghost with The Regular, The Threadbarons and Paul Kimbiris & The Dark Side of Pearl
When: Friday, 02.08, 8 p.m.
Where: Globe Hall
Why: Mike Perfetti has been involved in many of Denver’s most interesting bands for going on two decades in his capacity as a bassist, drummer and guitarist. But with Gun Street Ghost Perfetti gets to share his gift for storytelling. Perfetti orchestrates the details of the story and the essence of the people in them with a masterful hand with the help of his talented bandmates. It’s been some time since Gun Street Ghost has put out a record but in the live setting you’ll likely get a taste of the new material and with any luck 2019 will see the release of the group’s full-length.

Who: Sonorous: Gregg Ziemba, Alex Trujillo, Joshua Trinidad
When: Friday, 02.08, 6 p.m.
Where: Syntax Physic Opera
Why: This is a dinnertime show from some of Denver’s most talented practitioners of jazz and experimental music including Gregg Ziemba and Alex Trujillo of Rubedo and Joshua Trinidad whose free jazz band Cougar Legs and psychedelic fusion project GoStar have showcased his prodigious talent. Trinidad and Ziemba also perform in Wheelchair Sports Camp. Heavy hitters.

Who: Bud Bronson & The Good Timers, Muscle Beach, SPELLS
When: Friday, 02.08, 8 p.m.
Where: Lost Lake
Why: Bud Bronson & The Good Timers are one of the few reliably great and spirited straight forward rock and roll bands anywhere. A touch of punk but BBTGT aren’t trying to be limited by subgenre. Muscle Beach is impossible to simply call post-hardcore or post-metal or even noise rock but are an inspired distillation of all three. SPELLS is a C+ party punk band but they really work for that C+ and are more fun than many B+ punk acts. They’re no Refused but who is?

Who: Don Chicharrón album release w/Los Mocochetes, High Plains Honky and DJ A-Train
When: Saturday, 02.09, 8 p.m.
Where: Hi-Dive
Why: Don Chicharrón is a band whose blend of chicha (Peruvian cumbia with roots in popular music of the 1960s and 1970s that incorporated psychedelic rock and Andean folk music), metal, spaghetti Western and other musical forms is lively and fluid for a group of nine people who come from disparate musical backgrounds. Anyone that has been able to catch the group live knows it’s musicianship is expertly integrated so it never feels like anyone is doing too much at once. The group’s debut, self-titled full-length will be available at this show and its expansive compositions sound like the soundtrack to the Love and Rockets comic series in its multi-cultural aesthetic and ineffable sense of the futuristic.

Who: An Evening With Nels Cline 4
When: Saturday, 02.09, 9 p.m.
Where: Ophelia’s
Why: Nels Cline has been involved in more noteworthy music than any modern human has any right to claim including turns with Geraldine Fibbers, Wilco and John Zorn. This is one of his experimental jazz groups so expect plenty of left field improv.

Who: Esmé Patterson and band play the Songs of Prince from Sign O’ The Times w/Acuna Black and CRL CRRL
When: Saturday, 02.09, 8 p.m.
Where: The Oriental Theater
Why: Esmé Patterson brings together a group of ace players and collaborators to perform songs from Prince’s 1987 masterpiece Sign O’ The Times, which is entire apropos for the times we’re in now.

Who: Alphabet Soup #40: Felix Fast4ward, Furbie Cakes, MYTHirst, Yung Lurch and Dashwoo
When: Saturday, 02.09, 8 p.m.
Where: Thought//Forms
Why: This is the latest edition of Alphabet Soup, a showcase for some of the most forward thinking and innovative producers and soundscapers in Denver. The event used to take place mostly at Deerpile but with the demise of that performance space the event has been moved to other venues including tonight at Thought//Forms gallery.

Who: Pedro the Lion w/Tomberlin
When: Sunday, 02.10, 8 p.m.
Where: The Bluebird Theater
Why: Phoenix is more than just a clever title for the first Pedro the Lion record in fifteen years. David Bazan spent years touring as a more or less solo act and releasing a series of acclaimed records. But like most artists he hit a wall at some point and in 2016 he got to the place of a low point crossroads. Two years later he was writing and recording songs that made sense for Pedro the Lion with words of reinvention, rediscovery, reclamation and embrace of the spirit of one’s past self and past creations that helped to define the person you are now. While personal to Bazan and his bandmates, one thing Bazan has been able to do as a songwriter is to write material that transcends the personal, transcends any faith or philosophical orientation that informs it and to articulate with sensitivity and kindness the struggles and pain everyone seems to experience.

Who: Gang of Four w/Plume Varia
When: Monday, 02.11, 8:30 p.m.
Where: Globe Hall
Why: Gang of Four is the influential post-punk band that perfectly combined punk with disco and a sharp cultural critique that took aim at more universal issues in Western and global culture of the 1970s onward. After all, the band named itself after a Chinese political cabal involved in the Cultural Revolution. The first three Gang of Four albums (1979’s Entertainment!, Solid Gold from 1981 and Songs of the Free released in 1982) were a blueprint for 90s and 2000s dance punk as well as a direct influence on Red Hot Chili Peppers from the beginning (GOF guitarist, and sole original member, Andy Gill produced the 1984 self-titled debut from RHCP). But few of the band’s descendants could match Gang of Four in its intensity, sonic inventiveness much less socio-critical acumen. The band’s latest album, with its current line up, is HAPPY NOW released in 2019 via PledgeMusic. A little more topical than usual, naming, presumably, Ivanka Trump in a song, Gang of Four hasn’t exactly taken the gloves off. Opening the show is Denver-based downtempo dream pop duo Plume Varia performing one of its now rare shows.

Who: SMRT, Big J. Beats, Glissline, Escapism
When: Wednesday, 02.13, 7 p.m.
Where: Lost Lake
Why: Glissline is Tommy Metz who has been releasing gorgeously lush, brightly melodic, beat-driven IDM for more than a decade. As Glissline, Metz has been melding visual elements with his musical compositions for a multi-sensory experience including a well-crafted low end. It’s dance music for dreaming. Big J. Beats is a producer whose work is most often, and justifiably so, associated with hip-hop but his imaginative soundscaping transcends genre completely which is why he is one of the Mile High City’s greatest beat makers.

Who: Richard Thompson Electric Trio w/Ryley Walker
When: Wednesday, 02.13, 7 p.m.
Where: Boulder Theater
Why: Richard Thompson was one of the leading lights of influential folk project Fairport Convention. He also played guitar on the first two Nick Drake albums. From the 1970s onward, Thompson has created a body of work that should be more well-known outside folk circles with brilliant rock and pop songs. There is also his prodigious work as a collaborator and contributor to other people’s recordings. His final album as the duo of Richard and Linda Thompson, 1982’s Shoot Out the Lights is a masterpiece of folk rock. Following the tour for that record the Thompsons split and Richard went on to a critically acclaimed and prolific solo career as well. As the name of the group suggests, this will be a showcase of Thompson’s electric music rather than the acoustic songs, though you never know, maybe Thompson will bring in some of his classic material written originally for acoustic but reconfigured for the electric trio. In 2018 Thompson released the dark and moody 13 Rivers.