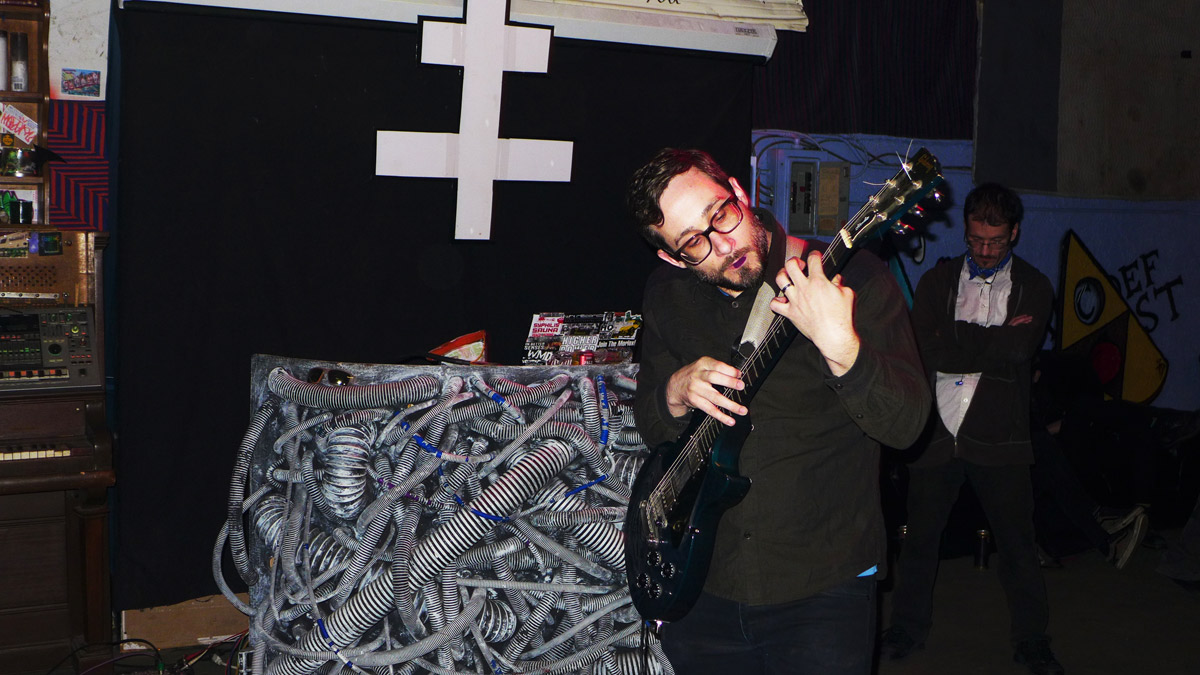 Tonight, May 26, 2018, at 5 p.m. (and running until 11:15) several of the Denver area’s most sonically adventurous musicians will assemble in the basement of Bar Max for 102 Wires. The event was organized by Kevin Richards who is known in local underground music circles for his most recent experimental guitar and electronics project Equine, which has been very prolific of late with the release of a handful of 2018 albums so far including White Majick, Der Howling, Equencing and Twins. In years past, Richards brought his knowledge of jazz chord theory to the too-post-hardcore-for-noise rock/too-weird-for-post-hardcore band Motheater, the quasi-performance art Hogsplitter, noise project Epileptinomicon and solo guitar drone band Temples. We recently sent some questions Richards regarding 102 Wires, it’s inspirations, aims and what Richards hows will be the aftermath.

Queen City Sounds: What inspired doing an event like this? Have you seen anything like this before putting the event together? Perhaps one of the late Glenn Branca’s guitar orchestra events.

Kevin Richards: I don’t know that I’ve actually seen something quite like this before, although I have heard of somewhat similar festivals. The large ensemble aspect was definitely inspired by Branca and Rhys Chatham. Generally speaking, I was hoping to gather as may atypical guitarists (or guitarists doing something atypical for themselves) in one room with minimal instruction and see what happens. This fest is curated in a form, but has been intentionally fairly hands off as far as what people are bringing to the table. Hopefully this yields surprises for us all.

What will the show look like/be like and what kind of logistics and gear did you need to bring together to make it happen?

I am hoping to have people around the perimeters of the room performing, and the audience in the middle. there may be people performing solo sets, Steve Reich repertoire, original compositions, perhaps some prepared guitar, ambient loops, large ensembles, and some things that even I don’t quite know what they will be like. This should be six hours of guitar-centric musical fascination. As for the gear, I will of course be bringing multiple guitars and amps. We have performers who don’t generally play guitar and so there is a bit of borrowing happening. Logistics wise, this came together much more smoothly than I had anticipated. Max at Bar Max was great about letting us use the space for the event and all of the performers are putting in a decent amount of work to help this thing all come together. So in the end I can barely take credit for this team effort, as it should be.

With a diverse set of talents, skill sets, aesthetics and so forth, did you put any rules on how things will go and if so why so?

]The general concept/rules of the things were one, you must do something either atypical for how the instrument is generally approached, or you had to do something a bit out of your wheelhouse. Two, as much as possible this should be guitar only, so no drums, or other instruments. I think this event will for the most part adhere to both of these rules, with a couple well-reasoned exceptions. I tend to like working within musical restrictions myself as a means to foster creativity, and I was hoping this had a similar effect on others in this setting.

Why did you think bringing together a broad spectrum of musicians and guitars and whatnot would prove interesting?

How could it not? I have a certain love of the creative chaos that this type of gathering could bring. The joy from this will come from all of the things I didn’t anticipate.

What do you hope is the outcome of this show for both the people there and what might happen in post with you and other participants?

I hope that the primary outcome of this show is that we all gather together and enjoy each others company and creativity. I do hope that this gathering spawns other creative endeavors among the participants. Many have never met each other and may not even know the other exists in the same town, so that aspect should foster some interesting encounters at the very least. For the audience, I hope they see something that they have never seen before, and leave rethinking the instrument in some way.