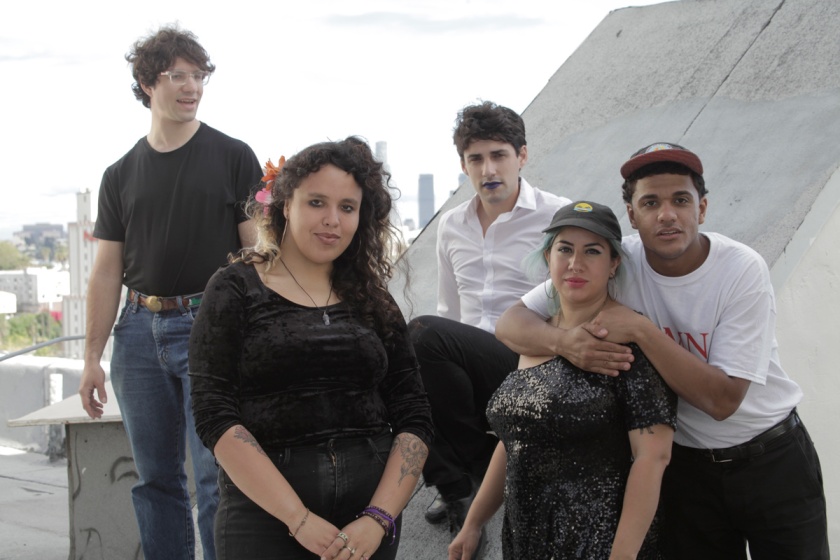 Now that the Smash Mouth show in Parker that was to happen Saturday is canceled you can make other plans either this evening or over the weekend. Here are some choice options as summer wraps up.

1.
Who: Weapönizer album release for Lawless Age w/Throne of Belia, Rotstrotter and Chemically Crippled
When: Friday, 8.18, 7 p.m.
Where: 7th Circle Music Collective
Why: Weapönizer has long been one of the best, most underrated, metal bands in Denver. It’s latest album, Lawless Age, is a showcase for how black metal, death/grind and a well-crafted rock song with hooks are not irreconcilable concepts. You also get to see excellent grind acts Rotstrotter and Chemically Crippled. Also, the show costs $6.66. Someone, somewhere involved in the show, has a wonderfully irreverent sense of humor.

2.
Who: Future Days
When: Friday, 8.18, 10 p.m.
Where: Mutiny Information Café
Why: Future Days is a three-piece, yet completely legit, Can cover band. It includes drummer Andrew Lindstrom who has played in noise jazz band Nightshark and sludge punk outfit Git Some. Guitarist Zach Bauer is also a veteran local musician whose versatile talent you could hear in outsider punk band Zombie Zombie and stoner noise rock outfit The Outer Neon. Bauer also has a brilliant weirdo pop album in the can that someone should help him put out. It’s like if Harry Nilsson and David Bowie worked on a secret project together. In addition to other material the band will perform “Sing Swan Song: and “More More Night” for this show.

3.
Who: Native Daughters, Abrams and Black Lamb
When: Saturday, 8.19, 9 p.m.
Where: Streets of London
Why: Native Daughters are going on extended hiatus after this show. The instrumental heavy rock band writes songs as powerful and as compelling as watching an epic adventure movie. Sharing the stage tonight is the stoner rock band Black Lamb coming out of its own semi-retirement to show how harrowing emotion and mutant blues metal can be inspirational. Denver’s Abrams is a sludge rock band that puts momentum behind otherwise slow dynamics. Because of that, Abrams is able to tap into a familiar sound while giving what could be a well-worn genre a shot of real vitality.

4.
Who: Get Loose w/DJs Roger That & John Tyler
When: Saturday, 8.19, 10 p.m. – 2 a.m.
Where: The Thin Man
Why: Roger That and John Tyler are part of Denver’s electronic music world producing original music that is more like the underground techno that has been part of the more forward thinking end of electro in the world of the last ten years. Roger That once honed his craft in Berlin before returning to Denver within the last handful of years and that experience informed not just his music but the kind of soul-infused DJ sets like that which you can catch at this event.

5.
Who: Cat Power w/The Still Tide
When: Saturday, 8.19, 7 p.m.
Where: The Gothic Theatre
Why: The Still Tide is one of many bands making indie rock relevant again. Mainly because its songwriting and use of sound goes beyond the ossified chamber pop and watered down R&B-isms that made that form of music so stale by 2008. Some may consider The Still Tide a dream pop or shoegaze band because its creative use of atmospheric elements but even without such refinements The Still Tide’s songs shine for not being entirely predictable yet accessible. Also, Chan Marshall, Cat Power, isn’t someone who is phoning it in whether in her songwriting or as a performer. She was known for hushed pop songs early in her career and then her 2012 album Sun became an embodiment of the experimental impulses on all her records up until that time. Five years later, who knows what Chan Marshall will bring to the stage? That one can have that question of a performer two decades into her career must surely be considered a good thing.

6.
Who: Downtown Boys w/Surf Mom and Bleak Plaza
When: Sunday, 8.20, 8 p.m.
Where: Larimer Lounge
Why: Downtown Boys are arguably one of the most exciting “punk” bands today. Its new record, Cost of Living, recorded with Fugazi’s Guy Picciotto (who also produced records from Blonde Redhead and The Gossip). But pedigree and hyperbolic statements about a band being good are not enough. One should know that Downtown Boys take buoyant noise rock and play it with an irrepressible, youthful verve while singing anthems that take direct aim at social/economic inequality and the pervasive sense of fear and despair that plagues the world today. Is it any wonder that a band that is redefining or at least reinvigorating with vibrant ideas and undeniable passion comes from Providence, Rhode Island? That place that gave us bands like Arab on Radar, White Mice, Six Finger Satellite and all that great stuff on Load Records? Doesn’t seem like a coincidence and Downtown Boys is worthy of any of the aforementioned even if there’s no direct connection between the members of Downtown Boys and Providence’s great local music tradition. That the band is doing the reverse of “Girls” bands with no women in them is also cool statement in itself.

7.
Who: PiperFest w/Colfax Speed Queen, Ned Garthe Explosion and High Plains Honky
When: Sunday, 8.20, 8 p.m.
Where: Hi-Dive
Why: This is, “[a] benefit show and silent auction for 3 year old Piper Waneka who was recently diagnosed with DIPG (Diffuse Intrinsic Pontine Glioma) an extremely rare, aggressive, and inoperable brain tumor. All proceeds go towards medical costs and quality of life expenses for Piper.” So yes, a good cause. But you get to see the great psychedelic garage band Colfax Speed Queen and Ned Garthe Explosion, a psychedelic rock band that answers the question in the positive about whether great bunches of humor and disparate musical ideas can make for a good band. But Ned Garthe Explosion is beyond merely good. Best stage banter in Denver? Maybe so.

8.
Who: Washed Out w/Dega
When: Tuesday, 8.22, 7 p.m.
Where: Ogden Theatre
Why: Ernest Greene evolved right out of the chillwave straightjacket music journos who chimed in wanted to slap onto his music pretty quickly. Even though Greene’s song “Feel It All Around” is now synonymous with the opening music to Portlandia that the song can evoke memories of a more beautiful and tranquil time in your life almost every time is a testament to Greene’s gift for tapping into that part of your brain and memory. After exploring where he could go with guitars and a talent for writing non-wack nostalgic music, it seemed as though Greene became a little disillusioned with that musical path. All along he’d already had an interest in hip-hop production including his extensive use of samples on various records. He followed those instincts for his new album, 2017’s Mister Mellow. That it saw a release on respected experimental hip-hop label Stones’ Throw is perfect. Greene is still finding his footing after his reinvention but his ability to tap into an intospective yet hopeful frame of mind and evoke that in his listeners is completely intact. Likely he’ll play old songs but this tour will be one of the first times most people will get to see the new material that is more than a stones throw from his earlier dream pop/chillwave roots.

9.
Who: Pleasure Prince w/Nasty Nachos and Retrofette
When: Wednesday, 8.23, 8/8:30 p.m.
Where: Hi-Dive
Why: In 2009, Lily Scott appeared on the ninth season of American Idol. While she didn’t take first place, Scott made an impression on many who saw her song. But, creatively anyway, Scott went on to much more respectable endeavors including her rock band Varlet. While Varlet didn’t become a household name, it released some great music. Scott spent some time not being so public with her music making but her latest project, Pleasure Prince based out of Brooklyn, is making its debut in Denver. Lily Scott is a real vocal talent and Pleasure Prince’s downtempo atmospherics is proving to be a good vehicle for that.